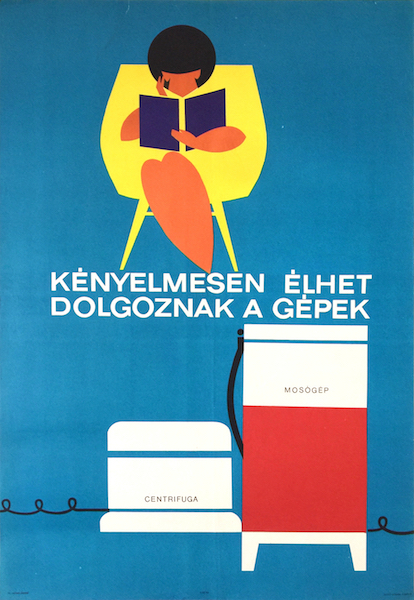 You can relax while the machines are working

Fine, light fold marks and wear, one tear at the top border.

You can relax while the machines are working is a 1965 Hungarian mid-century modern commercial poster advertising the convenience of home appliances.

In Hungary the use of electricity begun in the1870s. Initially factories, mines and mills used it to operate their machines. Later electricity was used for public transport. On the turn of the 19th and 20th century, households also used it, at the beginning only for lighting and by the 1930s, although it was limited, but the new invention, the radio, also used electricity. The electric household appliances started to appear on the market which gave ground to a gradual mechaniztaion. In 1949 the government nationalized the independent electricity suppliers to create on big unit of suppliers and unified prices. As  it was one of the aims of the first five year plan, the government started to introduce electricity to the smaller villages as well. The last village received electric power in 1963. Until 1945 the households did not use too much electricity due to the lack of machines and politics did not focus on improving the living standards in this respect. Besides, since Hungary and the Eastern bloc was very isolated, the culture of electronic household appliances could not sneak in from the Western world. In 1953 as a result of the government's policy of improving the living standards, households of Hungary received more electricity. The government declared that there was a demand to procure good quality household appliances. However, the electronic development of the households did not really start until 1957. After that a gradual growth begun.

By the 1960s, the period when this poster was published, housewives became aware of the existance of the electronic household devices, but still advertisements were needed to popularize them. After the 1950s when the living standard was very low, a slow development started and goods such as household appliances became available. The poster shows the stylized pictures of two machines: a tumble dryer and a washing machine. Above them there is a lady who is comfortably sitting in her chair reading, while the machines are doing the job - as indicated in the title of the poster. Very lovely design in the typical 1960s cartoon-like style.