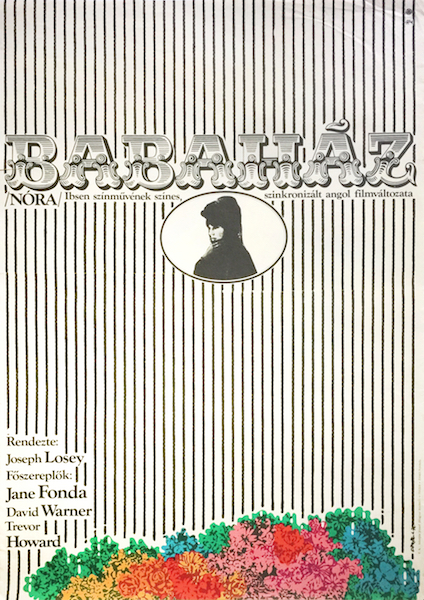 A Doll's House is a 1975 vintage Hungarian movie poster designed by Lajos Gorog.

A Doll's House is a 1973 Franco-British drama film directed by Joseph Losey, based on the play of the same name by Henrik Ibsen. It stars Jane Fonda in the role of Nora Helmer and David Warner as her domineering husband, Torvald. In the United States, the film was broadcast nationally on the ABC television network.

Losey's version of the classic play was extensively adapted for film. From Ibsen's expository dialogue, entire new scenes were developed by playwright David Mercer and integrated through a variety of invented sets. Losey's alterations generated considerable controversy, as did his casting of outspoken actress Fonda – known at the time as "Hanoi Jane" – in the lead role. (source: wikipedia.org)