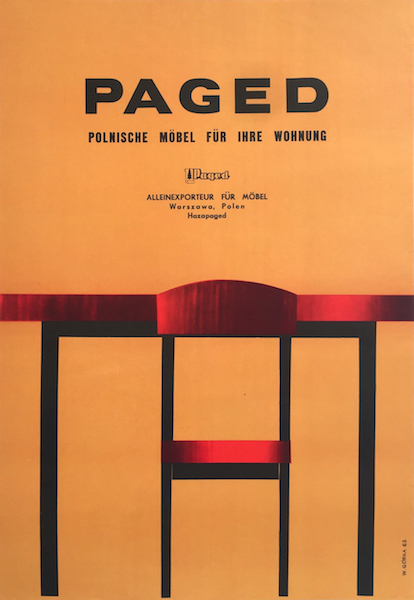 Paged - Polish furniture for your apartment

The artist's name is visible in the lower right corner of the poster: W. Górka 63

Paged is a Polish furniture manufacturer.

Wiktor Gorka was a graphic designer. In 1952, Górka obtained a degree in graphic design from the Academy of Fine Arts in Kraków where he was under the supervision of Jerzy Karolak. He studied painting in the studio of Jerzy Nowosielski and Tadeusz Kantor. The artist was a co-founder of the so-called Polish School of Posters, whose most important principles were: simplicity and clarity, the use of concise symbols and poetic metaphors, as well as diverse means of expression. Between the 1950s and the 1980s Wiktor Górka worked with the biggest Polish publishers and film distributors. He designed posters (amounting to nearly 300), book and magazine covers, commercial logos and prints. The artist participated in many exhibitions around the world. His posters and projects were awarded in the most important Polish and international competitions. He received second prize in a national competition for the poster 6-year Plan (1949), second prize at the International Film Poster Competition in Karlovy Vary (1962), first prize at the International Competition for Tourist Posters in Berlin (1967), Silver Medal at the Second Polish Poster Biennale in Katowice (1967), and others. Górka created posters for films such as: Spartacus, Beatrice Cenci, Two for the Seesaw, How Far, How Near, The Great Escape, Twilight of the Gods, One Man Band, 2001: A Space Odyssey, Sleepy Hollow and Marathon Man. His most famous work is the poster design for the cult film Cabaret (1973) directed by Bob Fosse with the memorable performance of Liza Minelli. The poster depicts cabaret dancers’ legs in black stockings as well as Joel Grey’s face in daring makeup, which together form a swastika shape. (source: www.culture.pl)