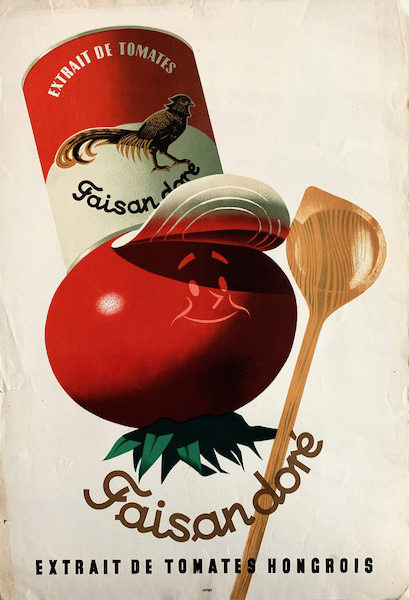 This charming export commercial advertising poster has an outstanding artwork by Szilas, who was one of the top poster artists of his time. The most well known tomato paste brand in Hungary is Aranyfacan, or Golden Pheasant in English. It has been produced since 1934 in unchanged form and quality. It's a traditional Hungarian product acknowledged worldwide for its taste and color, serving every criteria of healthy nourishment. Tomato paste is a thick paste made by cooking tomatoes for several hours to reduce the water content, straining out the seeds and skins, and cooking the liquid again to reduce the base to a thick, rich concentrate. By contrast, tomato purée is a liquid with a consistency between crushed tomatoes and tomato paste that is made from tomatoes that have been briefly boiled and strained. Based on the manufacturing conditions, the paste can be the basis for making ketchup or reconstituted tomato juice.

Tomato paste is traditionally made in parts of Sicily, southern Italy and Malta by spreading out a much-reduced tomato sauce on wooden boards that are set outdoors under the hot August sun to dry the paste until it is thick enough, when it is scraped up and held together in a richly colored, dark ball. Today, this artisan product is harder to find than the industrial version (which is much thinner). Commercial production uses tomatoes with thick pericarp walls and lower overall moisture; these are very different from tomatoes typically found in a supermarket. Tomato paste became commercially available in the early 20th century. This piece is a wonderful addition to any kitchen, or gastronomy related environment. It represents food and culture, the art of cooking, preparing and serving rich or delicate and appetizing food, the cooking styles of particular regions, and the science of good eating.