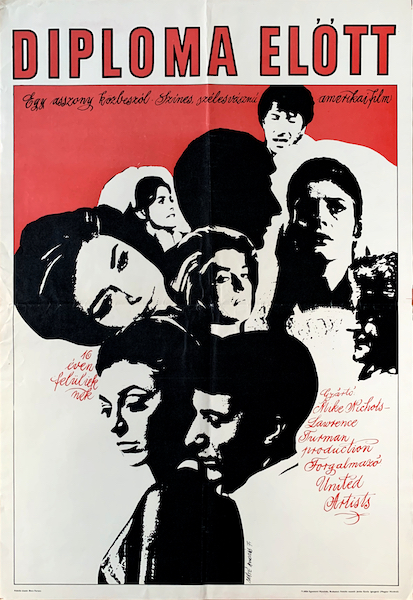 The Graduate is a 1971 Hungarian movie poster designed by Andras Mate.

The Graduate is a 1967 American romantic comedy-drama film directed by Mike Nichols and written by Buck Henry and Calder Willingham, based on the 1963 novel of the same name by Charles Webb, who wrote it shortly after graduating from Williams College. The film tells the story of 21-year-old Benjamin Braddock (Dustin Hoffman), a recent college graduate with no well-defined aim in life, who is seduced by an older woman, Mrs. Robinson (Anne Bancroft), and then falls in love with her daughter Elaine (Katharine Ross).

The film was released on December 22, 1967, received positive reviews and grossed $104.9 million in the U.S. and Canada. With the figures adjusted for inflation, the film's gross is $805 million, making it the 23rd highest-ever grossing film in the U.S. and Canada.[6] It won the Academy Award for Best Director and was nominated in six other categories. In 1996, The Graduate was selected for preservation in the U.S. National Film Registry as being "culturally, historically, or aesthetically significant." Initially, the film was placed at No.7 on AFI's 100 Years... 100 Movies list in 1998. When AFI revised the list in 2007, the film was moved to No.17.