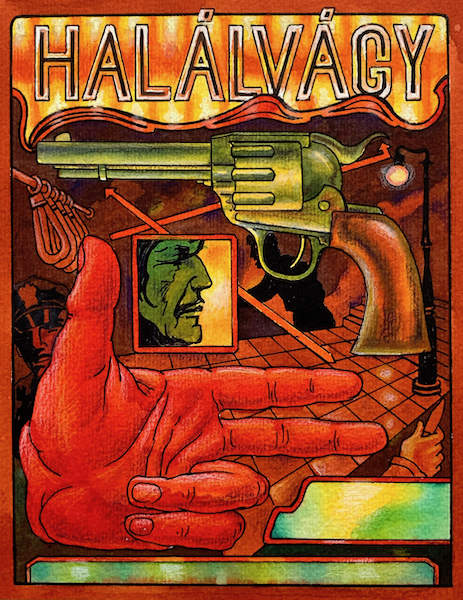 Death Wish is a 1979 vintage Hungarian poster maquette by Andras Felvideki. Hand painted original artwork. A different design by the artist was used for the Hungarian first release movie poster of this film.

Death Wish is a 1974 American vigilante action drama film loosely based on the 1972 novel of the same title by Brian Garfield. The film was directed by Michael Winner and stars Charles Bronson as Paul Kersey, an architect who becomes a vigilante after his wife is murdered and his daughter sexually assaulted during a home invasion. This was the first film in the Death Wish film series; it was followed eight years later with Death Wish II and other similar films.

At the time of release, the film was criticized for its apparent support of vigilantism and advocating unlimited punishment of criminals. Allegedly, the novel denounced vigilantism, whereas the film embraced the notion. The film was a commercial success and resonated with the public in the United States, which was experiencing increasing crime rates during the 1970s.