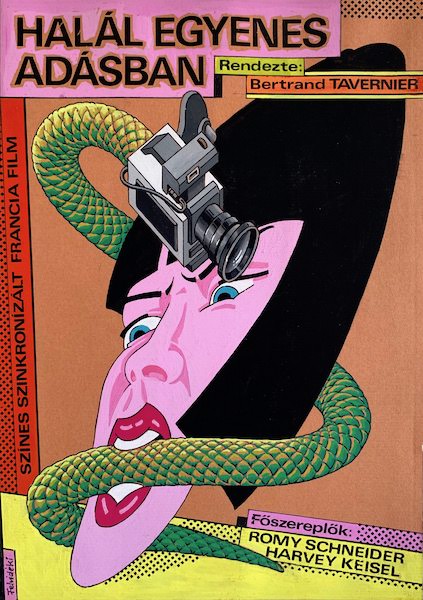 Death Watch is a 1984 vintage Hungarian movie poster maquette by Andras Felvideki. Hand painted original artwork. A modified version of this design was used for the Hungarian first release movie poster of this film.

The film is set in a future where death from illness has become rare. When Katherine Mortenhoe is diagnosed as having an incurable disease, she becomes a celebrity and is besieged by journalists. The television company NTV (headed by Vincent Ferriman) offers her a large sum of money if she will allow her last days to be filmed and made into a reality television show – they have already spied on her as she is told of her diagnosis (her doctor is colluding with them) and prepared posters for the show which show her face (to her annoyance when she sees the posters on display before they have contacted her). Katherine pretends to agree but evades NTV's employees and goes on the run with the assistance of a casual acquaintance called Roddy. The audience knows – but she does not – that Roddy is, in fact, a senior NTV cameraman who has undergone an experimental surgical procedure which implants cameras and transmitters behind his eyes, so that everything he sees is relayed back to NTV, who use it as the basis for their reality show. Roddy has done this mainly for money to give his estranged wife and their son. A side-effect of the procedure is that he will go blind if he experiences more than a short period of darkness; he uses drugs to keep awake, has learned to sleep for brief periods with his eyes open, and carries a flashlight which he shines on his eyes at night.

Meanwhile, Katherine's doctor has discovered that she is not actually dying and he informs NTV who tell no one and continue with the show, broadcasting an edited version of Roddy's feed. Continuing on the lam, Katherine asks Roddy to take her to Land's End. The two arrive and sit on the beach and have a long talk. Katherine then asks Roddy to take her to town and buy her some lipstick. He persuades her to stay by the beach knowing that she will be recognized if she goes with him. In town, Roddy sees "Death Watch" playing in a pub and begins to cry. He returns to the beach as night is falling and has an emotional breakdown, losing his flashlight. Katherine comes to him and he asks her to help him. She finds the flashlight and shines it in his eyes, but he has already gone blind. Roddy admits who he is, and what he is doing, to her. As the feed has ended to NTV due to Roddy's blindness, they send a helicopter to Land's End with a film crew to finally reveal to Katherine that she is not dying. However, Roddy and Katherine leave undetected as the helicopter arrives.

Katherine takes Roddy to her husband's home in the country nearby. She has not seen her husband Gerald in 6 years. After the two stay overnight, Katherine and Gerald talk about their relationship as Roddy sleeps in a chair outside. NTV calls Gerald's home and after he speaks with them, he tells Katherine they are coming and that she is not dying and needs to stop taking the medicine she was given. Instead, Katherine takes all of it. Gerald is angry at first but finally accepts her decision. Roddy awakens and Gerald informs him that Katherine has died. NTV arrives by helicopter with producer Vincent and Roddy's wife in tow. Roddy and Gerald threaten to kill Vincent and he and the rest of the NTV crew leave with Roddy's wife staying behind. Roddy reconciles with his wife and introduces her to Gerald.