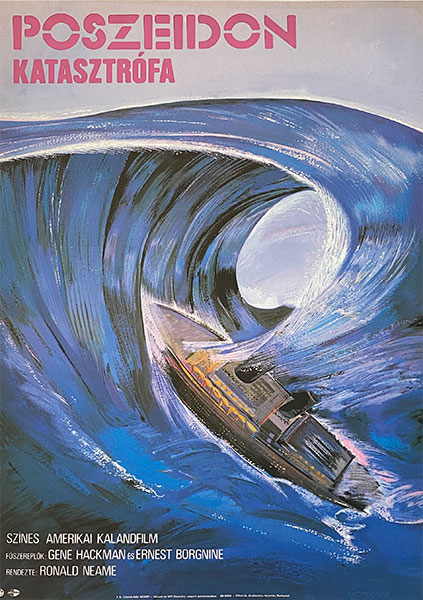 The Poseidon Adventure is a 1985 original Hungarian vintage poster designed by Sándor Rácmolnár. The poster is the first release of the movie in Hungary.

Impressive painting-like composition for a 1972 American action-adventure disaster film, The Poseidon Adventure. The film was directed by Ronald Neame and produced by Irwin Allen, and based on Paul Gallico's novel of the same name. The film features an all star cast, including Gene Hackman, Carol Lynley, Ernest Borgnine, Stella Stevens, Shelley Winters, Red Buttons, and in an early screen role, Pamela Sue Martin. It won a Special Achievement Academy Award for Visual Effects and an Academy Award for Best Original Song (for "The Morning After"). Shelley Winters won the Golden Globe Award for Best Supporting Actress – Motion Picture and was nominated for the Academy Award for Best Supporting Actress for her role. It also received a nomination for the Golden Globe Award for Best Motion Picture – Drama. The plot centers on the SS Poseidon, an aged luxury liner from the golden age of travel, on her final voyage from New York City to Athens before being sent to the scrapyard. On New Year's Eve, she is overturned by a tsunami caused by an underwater earthquake. Passengers and crew are trapped inside and a rebellious preacher attempts to lead a small group of survivors to safety. (source: wikipedia.org)