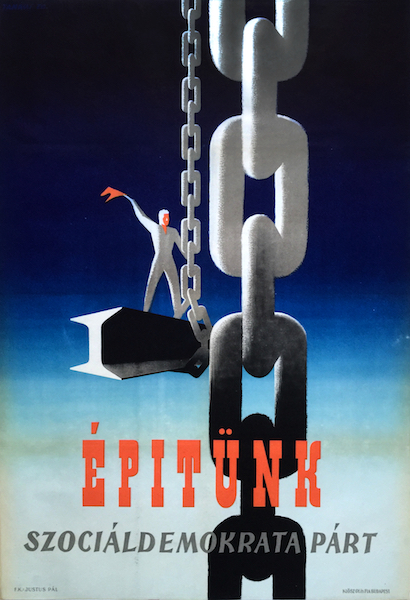 Zoltán Tamássi's outstanding political poster for the 1947 elections in Hungary is one of the greatest examples of propaganda art ever created. It carries the message that the rebuilding of the country, devastated after World War 2 is of utmost importance for the Hungarian Social Democratic Party.

The symbol of this message is a messenger, standing on a steel beam which hangs from a crane chain in infinite space. He's right arm is in the air, waving a red kerchief. The same red colour is used for the simple, one word slogan of the poster "We build" ("Építünk" in Hungarian). Beneath the slogan, we can find the name of the Social Democratic Party.

The artist, Tamássi was famous for his ability to design well-polished, concise symbols that were able to transmit extremely compressed, but clear messages, and this is one of his best, most important works.

Zoltán Tamássi was an important poster artist and graphic designer.

His master was Ferenc Helbing at the Applied Art School of Budapest, from where he graduated in 1934. Besides being an artist, he was also good at sports and was a professional soccer player playing in a famous Hungarian soccer team, FRADI (aka. Ferencváros or FTC). In 1933 the team won the national championship, however Tamássi got chance to prove his talent only three times during the season.  Being a multi-talent, he was also known as ski jumper and race car driver. The love of sport was present through more generations of his family.

In 1937 together with György Konecsni he designed the Hungarian Pavilon of the Paris World Exhibition. After 1945 he became acknowledged as a graphic designer thanks for his political posters (between 1945-49) and safety campaign posters. Between 1970-1981 he was teaching graphic design at the University of Fine Arts, however, before 1947, he worked as a sports trainer as well,

Between 1945 and 1946 he worked at a State Bureau of Propaganda. In 1945 Tamássi was one of the leading graphic artists who manage to reform the visual language of the political poster in Hungary. He designed election campaign posters for opposite parties. Initially he was the propagandist of the Peasants’ Party but later on he got commissioned by the the Social Democratic Party and the Hungarian Communist Party. His works are defined by his keen sense for creating clear and monumental compositions. He used sculpture-like, massive shapes, usually setting an endless space as background. His characters often represent a particular social class: the worker, the peasant, the intelligentsia; or the enemy: the fascist or imperialist bourgeois. He preferred to use interesting or unusual angles, view from above and below in order to obtain a dramatic effect. Tamássi often applied well-known symbols, like the broken shackles. His posters cover important topics of the age: democracy, rebuilding, distribution of land, etc.

After the political turn in 1949, Tamássi remained a successful poster designer. He mostly designed travel, safety and propaganda posters. Some of them was to raise the attention to the dangers of public transport. His designs are very modern, clear compositions, presented by a very effective and powerful visual language.