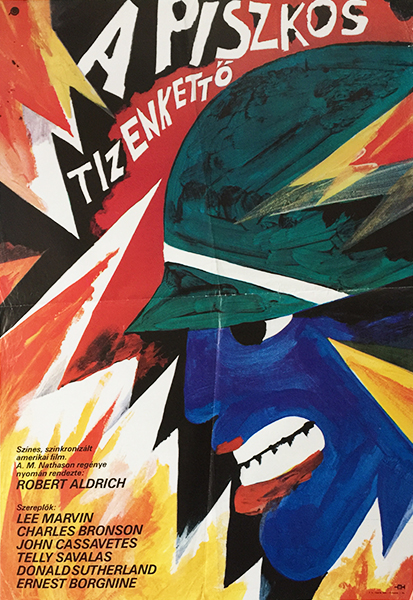 Fine, strong horizontal and vertical fold marks, creases along the border and the folds, small tears at the top right corner.

Impressive painted composition by István Balogh for the first release of the movie in Hungary.

The Dirty Dozen is a 1967 American war film directed by Robert Aldrich, released by MGM, and starring Lee Marvin. The picture was filmed in the United Kingdom and features an ensemble supporting cast including Ernest Borgnine, Charles Bronson, Jim Brown, John Cassavetes, Telly Savalas, Robert Webber, and Donald Sutherland. The film is based on E. M. Nathanson's novel of the same name that was inspired by a real-life group called the "Filthy Thirteen". (source: wikipedia.org)