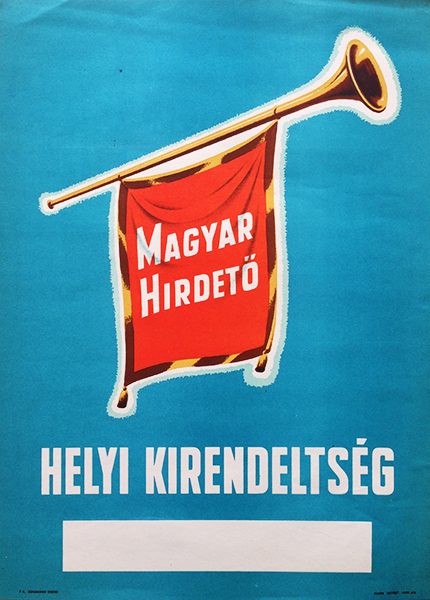 Fine, a small paperloss at the bottom right corner.

The story of the Hungarian Advertiser started in 1909 when the Budapest municipality decided that the right to place advertisements in public areas should belong to the Advertising Company. The reason was said to be the fact that placing advertisments on the streets had a lot to do with the aesthetics of the city thus the municipality of the capital is more competent in decision making related to posters than private companies. In 1911 there were 195 advertising pillars throughout Budapest and by the beginning of World War II (1939) this number rose significantly whilst boards and placards also appeared. At the beginning of the Socialist era in 1949 the planned economy commettee decided to establish an organization which doesn't only cover Budapest but the whole country thus the State Owned Advertising Company was born which was operating which was responsible for placing mostly political posters in 120 locations in Hungary. The company was named MAHIR in 1956 when it started to deal with advertisment design and research, realization of certain advertising tools such as posters as well as the broadcasting of advertisments. Its scope of duty involved exhibition planning, making of gift cards, etc....It had 19 directories and local offices in different counties. By the 1980s numerous foreign PR companies appeared thus MAHIR started to lose territory on the Hungarian advertising market. The situation worsened after 1989, the change of the sytem. Today MAHIR is still existing but is owned by a private company.

This poster is a bianco piece for the local office of MAHIR. The design is very simple. It only has the symbol of MAHIR on it - the trumpet with the flag on which Hungarian Advertiser is written. The text below it says: local office and at the bottom there is a blank space where the address of a particular local office was to be written.