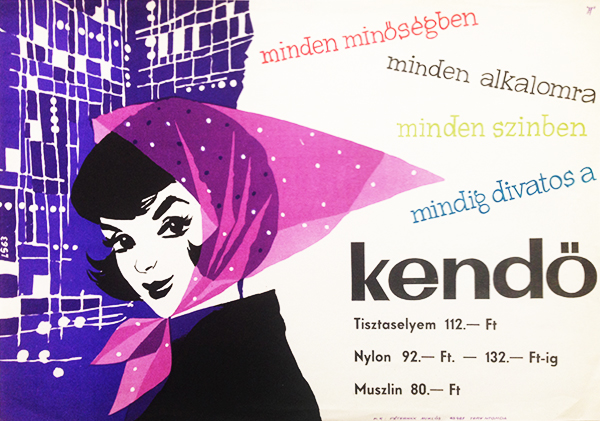 Fine, light creases along the border.

Decorative tram poster by Sándor Lengyel. The text say that kerchief was available in every quality, for every occasion, in every colour and it's always in fashion. The prices are listed for three types: pure silk, nylon and muslin. It is quite interesting that the nylon was more expensive than the muslin and some versions of it were more expensive than pure silk. Today this would not be possible, but in the 1950s and 1960s nylon was a very fashionable material as it was relatively new on the market, thus it could be sold more expensive. In the 1950s the ideal woman was masculin and always appeared in boots and overalls on advertisements. By the end of the decade this trend changed: women returned to a more subtle, elegant and fashionable clothing and in the same time more and more cosmetic- and fashion-related advertisements appeared on the streets and in the magazines.

This poster is a typical Sándor Lengyel design. Sándor Lengyel was an extremely sought-after artist in the 1960s and most of the time he was commissioned for commercial and fashion posters. Just like on this poster Lengyel applied attractive and fashionable cartoonn-like characters on the majority of his designs. This is a very elegant composition as most of his fashion posters. The shades of purple are very harmonious and the different colours of the text bring some playfulness to the composition.