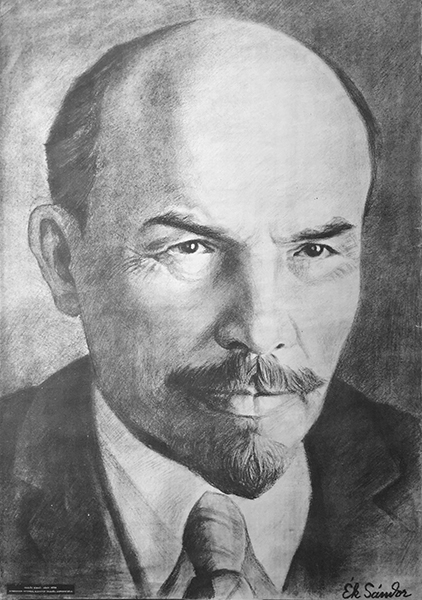 This vintage Hungarian Stalin poster designed  in around 1950 by Sandor Ek (Alex Keil), who was a Kossuth Prize winning Hungarian artist. He believed in the worker movement throughout his whole life and painted numerous works that corresponded the standards set by socialist relism.

After the Second World War in Hungary there were attempts to attain democracy but in 1949 the communist party completely took over. They had a strong propaganda, covering the streets with posters that were made based on the Soviet model, in socialist realsit style.This poster of Lenin was published at the beginning of the socialist era.

Vladimir Iljich Ulyanov who is better known as Lenin (1970-1924) was a Russian lawyer, Communist revolutionary, the first leader of the Soviet Union, a marxist theorist and the founder of Leninism. He is among the ones that had the greatest influence on the 20th century history. He believed in the Communist ideology and was actively taking part in political life since his university years trying to plant the seeds of bolshevism.

Lenin believed in Marxism and regarded his interpretation of it as the best and only one to be executed. He declared that the human race would achieve pure communism once, states and classes would disappear and an egalitarian society would be born where workers wouldn't be exploited and alienated anymore. Labourers would be able to take control of their lives according to their abilities and personal needs. He did believe that what he created in Russia would eventually lead to the establishment of the pure communist society.

He was a very popular character even among those who did not necessarily agree with his politics. He was a very intelligent, charismatic person with great rhetoric abilities. Lenin established the first worker-peasant state six years after the October revolution and he was the one who introduced socialism as a form of state in Russia. However, in oder to successfully reform the Russian society he applied the means of terror. Lenin endorsed terror as a means in politics and he never expressed any regret in relation with the victims of the red terror.

The Marxist-Leninist philosophy was introduced as a new world theory in the Soviet Union following his death in 1924. During the socialist era after the Second World War Lenin became a central figure of politics and socialist countries named cities, streets after him, built statues of him, decorated walls with his portraits, etc. Hungary wasn't an exception, there was a city called Lenin city (Tiszaújváros), Lenin square, Lenin street and other public places. This realistically drawn poster is one example of the propaganda material that covered the walls of Hungary in the early 1950s.