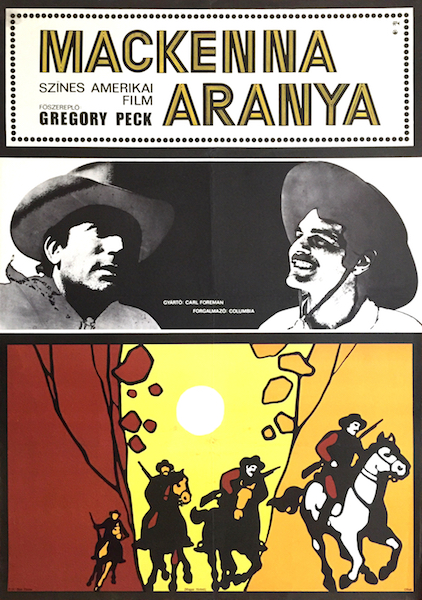 Mackenna's Gold is a 1969 American western film directed by J. Lee Thompson, starring an ensemble cast featuring Gregory Peck, Omar Sharif, Telly Savalas, Ted Cassidy, Camilla Sparv and Julie Newmar in lead roles. It was photographed in Super Panavision 70 and Technicolor by Joseph MacDonald, with original music by Quincy Jones. Mackenna's Gold is based on the novel of the same name by Heck Allen using the pen name Will Henry, telling the story of how the lure of gold corrupts a diverse group of people.

The novel was loosely based on the legend of the Lost Adams Diggings, crediting the Frank Dobie account of the legend (Apache Gold and Yaqui Silver) in the author's note. The film was a box office failure in North America, but went on to become a major overseas success, in regions such as the Soviet Union, Central Asia, and the Indian subcontinent. (source: wkipedia.org)