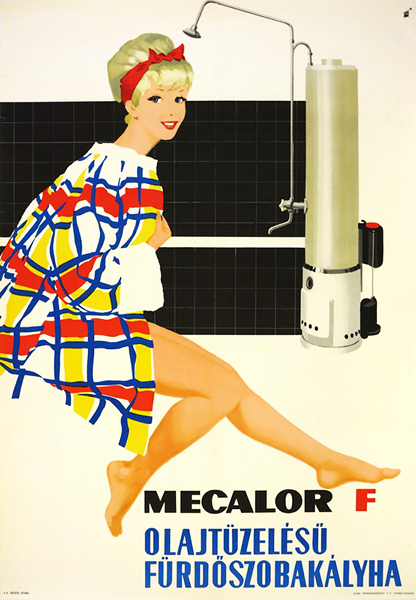 Poster to promote oil fired heaters. In the 1960s, when thes advertisement was created, a slight economical upswing took place what had an effect on the everyday life of people. New products were available, mostly modern appliences that made life of women easier. In the socialist era women were also working full time, hence they didn't have time for domestic work. The appearance of various machines made their lives easier and more comfortable. In that context oil fired heating was also a huge asset for households, as homes with no gas supply could utilize these. However, oil soon got expensive, thus having gas in homes couldn't be avoided. However, the poster signifies the beginning of modern household's era.

The composition carries the characteristics of the 1960s in terms of artistic style and the lady's look as well. Her hairstyle and the pattern of her robe were very fashionable in that decade. The chequered and bright coloured robe is in contrast with the black and white, rather minimalist bathroom. Contrast was often used on posters as a means for quickly grabbing passerby's attention. In this case the contrast is not only provided by the colours but also by the deatiled, almost realistic depiction of the advertised product, and the stylized character of the rest of the composition.