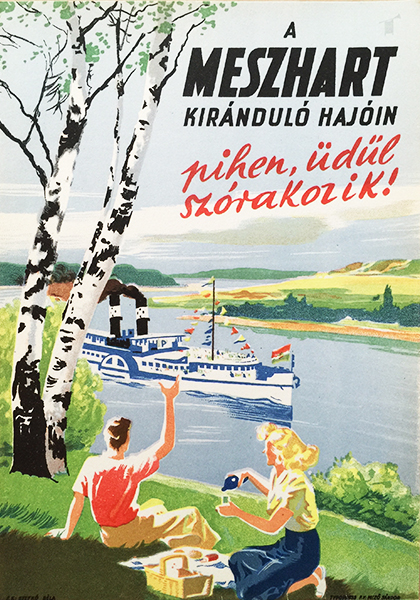 Near mint, small tears along the lower border

Tram poster for MESZHART the Hungarian-Soviet Shipping Plc. MESZHART was established in 1946 on Soviet initiative and besides river navigation it was also responsible for sea shipping. MESZHART mostly focused on merchant-ships but in order to generate more revenue they introduced their excursion ships as well. However, the company had never managed to attain a great success. It was shut down in 1954 due to lack of resources. This poster is advertising one of the excursion ships. The text says that on MESZHART excursion ships everyone can rest, have vacation and have fun.

The poster is very colourful and creates a nice atmosphere. It has the typical happy socialist couple having a picnic on the hillside waving to the people having fun on the MESZHART ship. The location is probably the Danube band which wa and still is a very popular touris destination. The compostion is very harmonic.