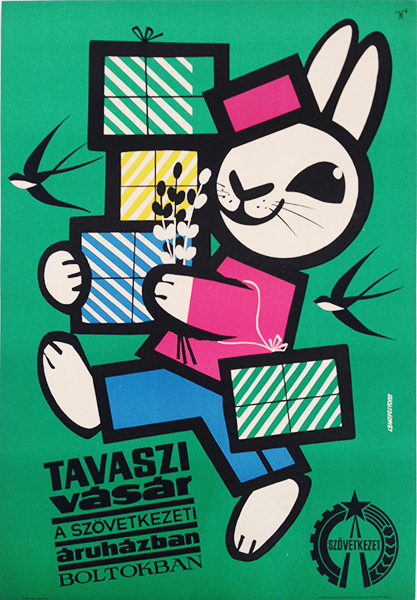 Spring Fair at the Cooperative stores

Advertisement for the Spring Fair in the shops of the Co-operatives.

The designer of this poster, Sándor Lengyel had a clear, simple, yet very elegant and effortless drawing style that originates in cartoon design. The typical elements of his works appear on this poster: the cartoon-like, cheerful figure and the colourful geometrical shapes create a joyful and carefree atmosphere. This work depicts a happy bunny carrying boxes, representing the joy of shopping. The use of simple, geometrical shapes, flat plains, strong contours and vivid colours contribute to a recognizably modern, own style of Lengyel.

It is remarkable that the artist created another poster for the event in the same year which was also issued. It was a similar composition and character, but it captured a lovely female figure. Both works are prominent and charming commercial designs from the 1960s.