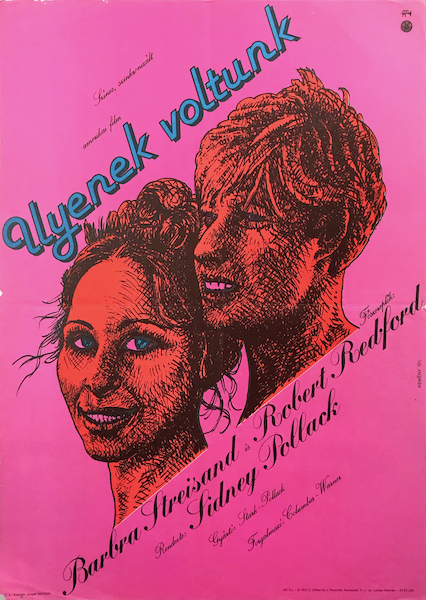 Way We Were, The

The Way We Were is a 1978 vintage Hungarian movie poster designed by Gyorgy Kemeny.

The Way We Were is a 1973 American romantic drama film starring Barbra Streisand and Robert Redford and directed by Sydney Pollack. Arthur Laurents wrote both a novel and screenplay based on his college days at Cornell University and his experiences with the House Un-American Activities Committee.

A box office success, the film was nominated for several awards and won the Academy Award for Best Original Dramatic Score and Best Original Song for the theme song, "The Way We Were," It ranked at number 6 on AFI's 100 Years...100 Passions survey of the top 100 greatest love stories in American cinema. The Way We Were is considered one of the greatest romantic movies ever. The soundtrack album became a gold record and hit the Top 20 on the Billboard 200 while the title song became a million-selling gold single, topping the Billboard Hot 100 respectively, selling more than two million copies. Billboard named "The Way We Were" as the number 1 pop hit of 1974. In 1998, the song was inducted into the Grammy Hall of Fame and finished at number 8 on the American Film Institute's 100 Years... 100 Songs list of top tunes in American cinema in 2004. It was also included in the list of Songs of the Century, by the Recording Industry Association of America and the National Endowment for the Arts. (source: wikipedia.org)