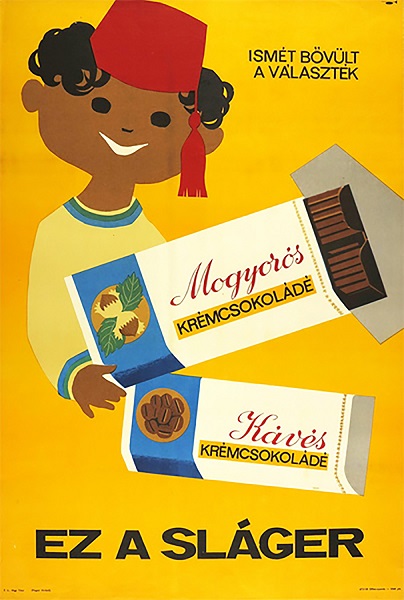 Cream Chocolate Bar - This is the hit

Cream Chocolate Bar is an original Hungarian vintage poster from 1967 by Ilona Müller.

The confectionary industry had serious problems after the World War II: losses of the former mechanization, deficit of the needed raw materials, what’s more, this industry was considered too luxurious for the weakened economy of the country. The industry was nationalized in 1948, as it was a common phenomenon in economic life of the country in the following Socialist era. There was no free market, but all the existing companies were integrated in the Hungarian Confectionary Industry Company which was controlled by the socialist leadership. As the production was centralized, the party dictated a low amount of money which the whole industry could use to produce, resulting a lower quality of the products. A lot of different versions of chocolates were produced with fancy names, they were not that different from each other, though. The majority of the available products contained only a low percent of pure cocoa powder, and contained no cocoa butter as it was replaced by some cheaper plant oils. The taste of that kind of chocolate couldn’t be compared to the taste we now know. That was why a wide range of sugary flavourings and fillings were added. In the 1960s there was a statewide price reduction which made it possible for customers to afford these products. Together with the price reduction, the clever marketing and skillful, humorous commercial propaganda achieved that people loved these kinds of chocolates, despite the lower quality.

This design is a colourful and delightful piece. A smiling, young male figure is depicted in front of a vivid yellow background. His face is lovely with the eyes captured with dots. He is holding two bars of chocolate, the product in the two new flavours. The bars appear in the original packaging and the upper pack is already opened. The appearance of the figure is exotic with the light brown complexion and the traditional hat of the East and some Southern regions, the tarboosh or fez.
The design is based on the beautiful visual effect of the excellent paper-cut composition: the poster appears as a collage of big, flat-like elements. The complexion of the figure create a spectacular contrast with the background, while the colours of the packaging and of those of the figure’s pullover are in perfect harmony with it. The exotic character is aimed to highlight the specialness of the new flavours of the chocolate as they refer to the fact that hazelnut and coffee was originally imported from faraway locations. At the same time, the style of the design is adorable with the cartoon-like image of the figure.

The creator of the poster, Ilona Müller, was working as a graphic designer from the 1950s. After studying at the Academy under György Konecsni and István Köpeczi-Bócz, she started working on exhibition designs and – mostly movie –  posters. Her style was characterised by fine line drawing and caricatures. She often captured cartoon-like figures of children on her posters in a charming atmosphere. She designed another piece for the cream chocolate, both versions are examples of the latter category. The other poster advertised the cream chocolate in pineapple and coconut flavours with a black child in front of a vivid orange background. It is also interesting that the lovely figure in tarboosh which appears in this design is the paraphrase of the famous Meinl Mohr design which is the trademark of Meinl Coffee even today. It was designed by Joseph Binder graphic designer in 1924.

This poster is a lovely commercial design from 1967. It evokes the period with its visuality and the advertised retrograde kind of chocolate, too.