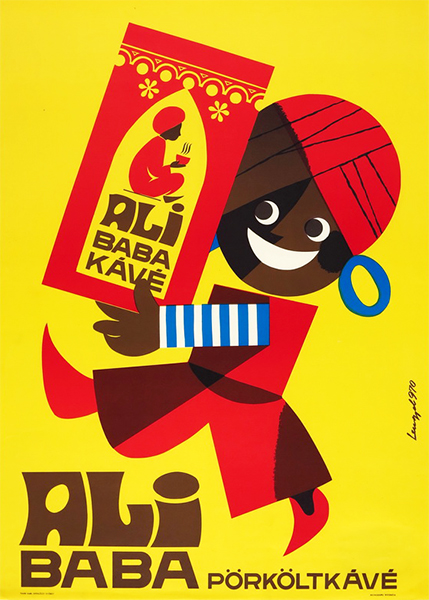 Decorative commercial poster by Sándor Lengyel who was a very sought-after graphic designer in the 1960s and 70s. He mostly designed commercial posters and he was famous for his cartoon-like style. In the 1960s and 70s a great cavalcade of styles were applied by artists, and this cartooonish manner was among the most popular ones, however, Lengyel managed to add his unique tone to it.

Ali Baba was a brand which sold quality coffee in the socialist times. Alibaba and similar brands had not appear until the 1960s when a larger variety of goods became available on the market. Prior to this period, at the beginning of socialism there was a lack of products and everything one could get was a very low quality. The advertisments of that time reflect the same atmosphere. However, in the 1960s a very slow rise of the economy had began and more goods became accessible for the people. For example in the 1950s almost only chikory coffee or other coffee substitutes were available, but from the 1960s different brands offering real coffee appeared on the market.  Ali baba was one of these brands. The brand is named after a fictitious folk tale character of Ali Baba and the 40 Thieves. The tale is one of the One Thousand and One Nights collection and is a part of the Arabian Nights section. It is a very popular tale worldwide. The brand name was cleverly chosen as it was a name what rang a bell to everyone and people associated an oriental atmosphere with it. It was very common to chose oriental names for coffee brands in those times, for example Orient Café Mocha.

The design is very impressive, Lengyel used quite typical coffee brand colours. This is a fine example of the era when the commercial market became more diverse simultaneously whith the softening of the strict political regulations controlling the artists thus the advertisments had become more colourful and exciting.The red and yellow combination was often used on coffee posters. A good example is the beautiful design of Ilona Müller, the Africana roast coffee. The vivid colours give an energetic feeling which is how coffee makes people feel. The Ali baba poster has a very clear design where we can see Ali baba himself carrying a pack of the coffee and he is clearly very happy about it.