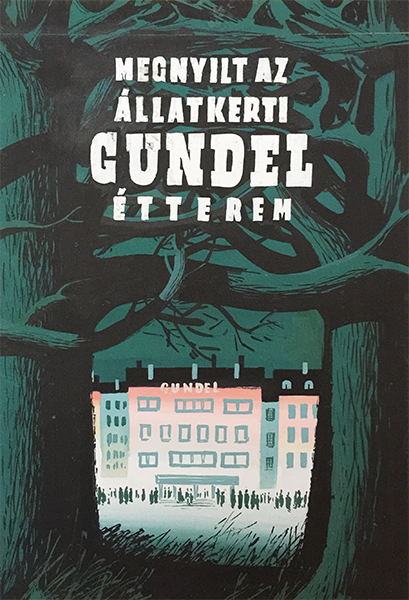 Gundel Restaurant has opened at the Budapest Zoo

A pair of beautiful painted poster artworks, created by Mátyás Sinka. They were created for the opening of the Gundel restaurant which is one of the most famous restaurants of Hungary. Its script says: ’The Zoo Gundel Restaurant has opened’ as the restaurant is located in the City Park, in the neighbourhood of the Zoo.

The history of the Gundel Restaurant dates back to the end of the 19th century. The restaurant was built in 1894 and its walls were decorated by the most important painters of the 19th and the 20th centuries. The building evokes the atmosphere of the turn of the century.

Originally the restaurant was led by Ferenc Wampetics, but it was taken over by Károly Gundel, the son of János Gundel who had been already the owner of several successful hotels and restaurants by that time. The restaurant gained its international fame under the lead of the control of Károly Gundel.

„Károly Gundel refined the Hungarian cuisine and created delicious dishes of his own taste. His pioneering work placed Hungary on the world map of gastronomy. (…) Károly Gundel also documented gastronomic history. He collected local recipes all over the Carpathian Basin as Hungary’s world famous composers Kodály and Bartok recorded Hungarian folk music. He is the author of cook books translated into dozens of languages.

The Restaurant earned his shine since Károly Gundel opened this house in 1910. Its reputation was strong enough to survive the stormy decades of war and communist nationalisation. Having been privatised in 1992 the GUNDEL took back its deserved position in Hungary as the country’s leading restaurant.”
(source: www.gundel.hu/en)

The poster artworks were created in 1953, when the restaurant had a reopening after the nationalisation in 1949. The decade of the 1950s was a hard period in Hungarian history, as well as in Hungarian poster design.  The political regime also determined the rules of arts, and the norms of Socialist Realism were to follow for poster designers too. It produced a very typical painting-like style of posters in the first part of the decade.

Mátyás Sinka designed a plenty of posters in every kind of subject, even the propaganda of the period. He often created humorous desings for campaigns for prevention from accidents, healthcare promotions, etc., but he also created interesting movie posters in a style recalling cartoons. These poster artworks are also different from the typical socialist realist compositions of the period, they rather reveal the own, cartoon-like expressiveness of the artist.

These pieces are beautifully painted compositions in a similar portrayal. The first version shows the restaurant from a distance, surrounded by a crowd of people, and decorative trees can be seen in the foreground with the script above. The second version also contains the view of similar trees, but the script is the main element here, in a delicate frame. The naturalistic motifs and the typographic design are depicted skillfully and in an impressive portrayal, contributing to the decorative designs.

Both versions of artworks were created to be reproduced later as a tram poster. Although a final poster wasn’t produced of them, these poster artworks are highly elegant and decorative.