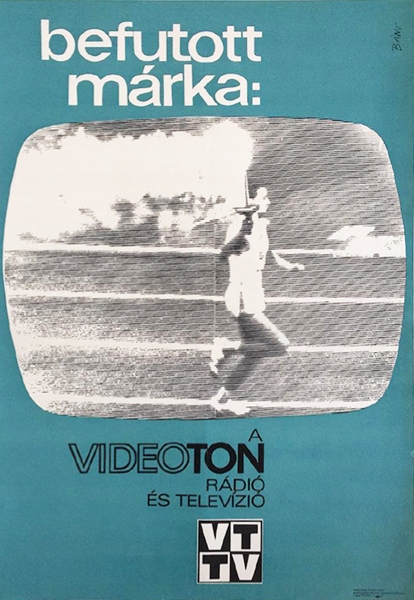 The poster advertises Videoton, the Hungarian electronics manufecturer. Videoton was established in 1938. In 1950 the company was nationalized, became state owned. It developed, manufactured and sold Videoton branded consumer electronics, IT and defence electronics products.

The runner with the olympic flame refers to the 1968 Summer Olympics, officially known as the Games of the XIX Olympiad, which was held the same year the poster was made. The '68 Olympics was an international multi-sport event held in Mexico City, Mexico, from October 12 to the 27th. These were the first Olympic Games to be staged in Latin America and the first to be staged in a Spanish-speaking country. (source: wikipedia.org)

The poster was made with photomontage technique. In the middle the photography of an athlete appears in the shape of  a television. Bánó, the artist often designed posters for electronic devices. This piece's main idea is based on a witty play with the slogan and the image: 'the winner brand is Videoton'