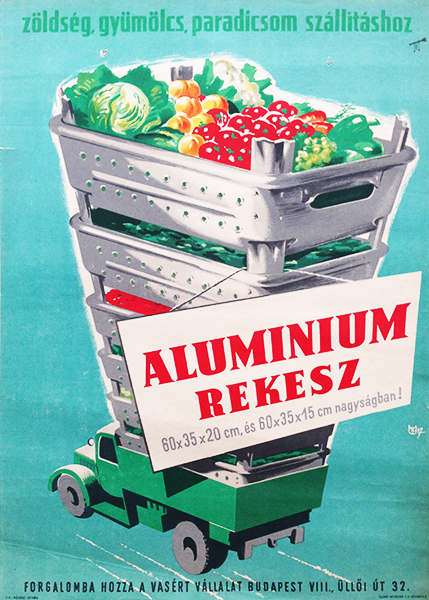 Very good, two bigger tears along the borders, two holes on the top.

János Macskássy was a graphic designer and painter, active from the 1930s until the 1960s. He created numerous fantastic posters, mostly commercial ones. His early posters followed the traditions of the modernist-constructivist style in Hungarian poster art. In the 1940s his posters were also influenced by the Hungarian painting art of the 1930s and 1940s. They shown spontaneous lines and opened forms, while some of his other works used intense colours, a concentrated cut-out, and an idealized photo-like character. In the late 1940s the artist designed several great posters for big companies, such as Tungsram or Diadal. In the 1950s he became the main poster designer of the national lottery company, and created remarkable pieces with his humorous, cartoon-like style.

The economy of Hungary was characterised by the lack of free competition and goods famine during the first part of the 1950s. This period was also connected to the compulsory norms of Socialist Realism within the Soviet Union. Although it lost its hegemony in Hungarian poster art around 1956, its influence was felt later as well. After 1956 a new economic policy was also introduced to raise living standards, which had a good effect on commercial poster art, too.

This poster was created these years, in 1958 in particular. The fact that it advertised aluminium carts to transport products reveals that there was a bigger supply of goods that time. The piece shows a simple, clear composition, focusing on the advertised product. A green truck with a high row of aluminium carts on the berm is depicted in front of a light blue background. The aluminium carts contain a representative selection of vegetables placed decoratively next to each other, in tightly packed rows. There is also a sign hanging from the carts with the name of the advertised product and the available sizes of it. The mostly dull colours and the realistic manner used here are features of Socialist Realism, but the impressive angle and the bold cut-out are signs of a freer artistic attitude. The emphasized three-dimensional effect is in contrast with the flat-like character of the poster, which contributes to the interesting visual trait of the whole design.

These features reflect the complexity of János Macskássy’s graphical tools. Although the atmosphere of the previous era can still be felt on the poster, it reflects the way the modern visuality started to reappear in designs. The piece also can be connected to the tendencies of the international poster design in the decade. Product advertising came to the front with gently humorous and playful designs which tendency was represented in Hungarian poster art by János Macskássy, among others. He achieved his mature style that time with cheerful and airy works. This piece also has a kind of funny, grotesque character.  As the aluminium carts are highlighted very much in the composition by exaggerating the different scales, the vehicle looks a bit like a toy compared to the carts.

All in all, this piece is good indicator of the positive changes in Hungarian poster art and in the economic life of the country in the end of the 1950s.