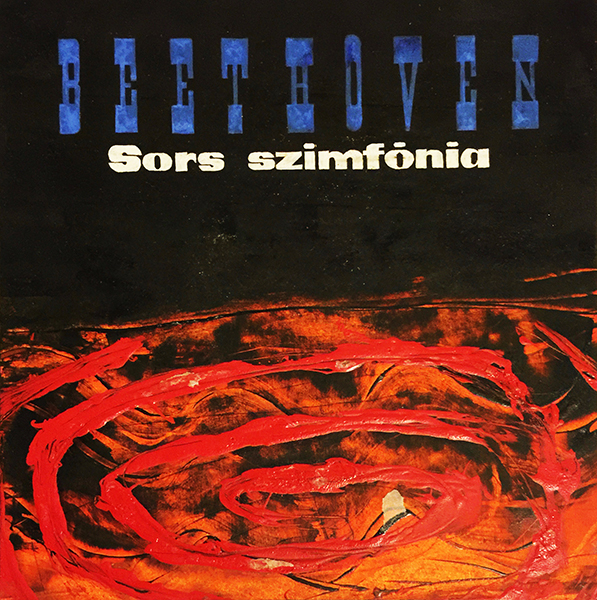 This original painted maquette was created in 1966, for a record sleeve cover of the Hungarian edition of Beethoven’s Symphony No. 5.

“The Symphony No. 5 in C minor of Ludwig van Beethoven, Op. 67, was written between 1804 and 1808. It is one of the best-known compositions in classical music, and one of the most frequently played symphonies. First performed in Vienna's Theater an der Wien in 1808, the work achieved its prodigious reputation soon afterward. E. T. A. Hoffmann described the symphony as »one of the most important works of the time«. [...] The symphony and the four-note opening motif in particular, are known worldwide, with the motif appearing frequently in popular culture, from disco to rock and roll, to appearances in film and television. [...] The initial motif of the symphony has sometimes been credited with symbolic significance as a representation of Fate knocking at the door. This idea comes from Beethoven's secretary and factotum Anton Schindler, who wrote, many years after Beethoven's death: The composer himself provided the key to these depths when one day, in this author's presence, he pointed to the beginning of the first movement and expressed in these words the fundamental idea of his work: »Thus Fate knocks at the door!«.”
(source: wikipedia.org)

Even if the story is a myth, even if it was true, there is indeed a fateful, tragical character of Beethoven’s piece of music. Iván Váradi, the graphic artist of this painted design, also based his artwork on this feature, so much more because the title in Hungarian said: ‘Fate Symphony’. He created a highly expressive work employing black and harsh warm shades of cadmium red and yellow. A wild, vertiginous lava-like whirlpool –motif is depicted at the bottom, drifting viewers’ gaze from the title appearing in front of the black darkness above.

There is hardly any information about Iván Váradi; however, observing his available works, it is visible that a simplified, but expressive character is really common in his designs. During the 1960s his works were likely to have an artistic, expressionist style, even applying tendencies minimalist, cartoon-like, or abstract tendencies, among other ones. This modality was in harmony with the poster art of the decade as a bigger artistic freedom came true for designers.

Here we can witness the design’s connection to abstract expressionism and action painting. Although these tendencies were specifically based in the USA around the middle of the 20th century, they had important influences in Europe in the first decades of the second part of the century. Both American and European post-war painting tendencies were gestural and immensely expressive. This artwork could be distantly connected to the German Emil Schumacher’s post-war abstract expressionism, the Danish K. R. H. Sonderborg’s spiritual transformations or Kart Otto Götz German artist’s abstraction. The ecstatic rhythm here expresses philosophical deepness, a human inscape, like a surrealistic vision of fate through the powerful symbolic character of abstract forms.