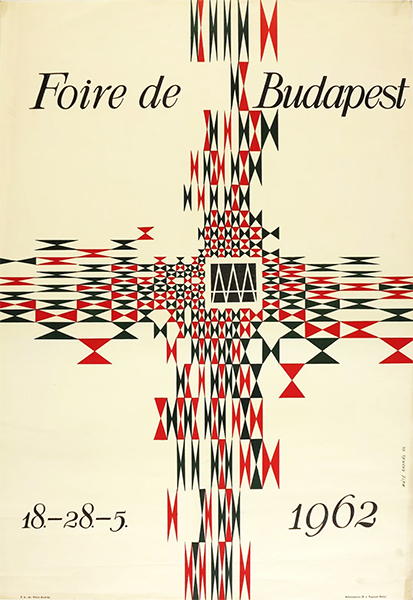 Decorative poster for the Budapest Fair (BNV) in 1962.

This atypical poster by András Máté is quite is made in op art style that wasn’t often applied by him. Pop art and op art emerged in Hungarian poster art in the 1960s when artists finally had a chance to experiment with a wider variety of techniques after the dark years of the obligatory socialist realist style. Op art is a non-figurative style based on visual effects achieved by the combination of basic geometric forms.

This manner was suitable for the poster genre. As stated in a contemporary article: “The influence of pop art and op art in fine art is minimal, and if we encounter it, it’s on posters, or other graphic design media or in fashion - the fields where society has already found modern taste”. The most famous Hungarian op art artist is Victor Vasarely, who  created posters himself. His dream was art that was available for everyone. He believed that people needed fine art just as much as music, and he didn’t regard the 20th century as the time of unique art: he wanted to produce art that can be reproduced and is affordable for anyone. He didn’t consider himself a painter, he regarded  ‘museum art’ obsolete and preferred applied art over it. Op art and poster art were both suitable to his vision. Initially these works perplexed the audience but by the 1950s it became very popular and appeared on numerous posters.

The posters designed for these international fairs played an important role in the birth of the emblem-like graphic design of the 1960s. Posters designed  for these occasions were economic and disciplined. The puritan and clean manner became the standard style for the International Fairs. Some examples are: BNV 1966, BNV 1967, BNV 1969, BNV 1970.

The visual effect on this poster by Máté is attained by pairs of red and black triangles in different sizes and shapes adjusted at the top angles. They are arranged in a way that the middle looks like a magnet that magnetizes little particles from all around. The image symbolizes the significant importance of the fairs and the fact that it attracts masses of  people from all around the world. The triangle pairs are smaller and more dense close to the center and a bit more scattered and bigger farther. This makes it look like masses of people captured from above rushing to one place from four directions, to a building for example and lining up at the doors. The poster neatly summarizes the magnitude and prestige of its subjects with a non-figurative, elegant visual language.