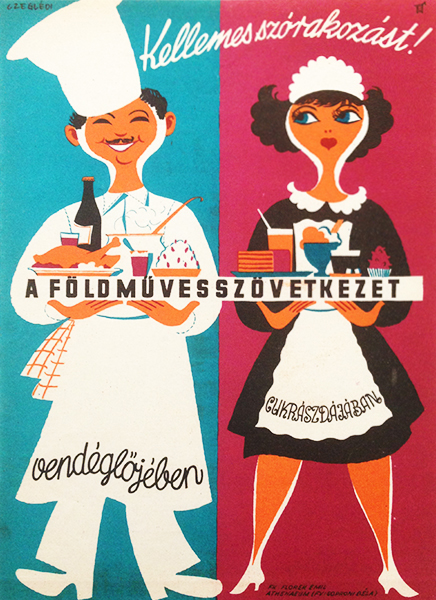 This poster from the 1960s advertises the restaurants and confectioneries of the cooperatives. The cook and  the waitress are holding a tray with a great variety of food and drinks. Obviously this great variety never existed in Socialism but they wanted to make everything look like it was fine. The cook holds grilled chicken, wine, sweets and soup while the waitress has a wide selection of desserts. Gastronomy in Socialism was not at all quality, but the meals presented on the poster looks delicious. Typical Socialist distortion of reality. It's the same with the happy staff. In the Socialist times meeting rude, unhappy staff in restaurants was a day-to-day thing. This poster is a perfect representation of trying to make people believe the unreal.

The cartoon-like design was commonly applied in the 1960s. In the 1960s artists had more freedom than they had in the preceeding decade, when the Socialist-Realist design was obligatory. After the monotony of the 1950s where monumental designs were born depicting strong workers gazing into the future, the playful cartoon figures of the 1960s was a big, but inevitable change.