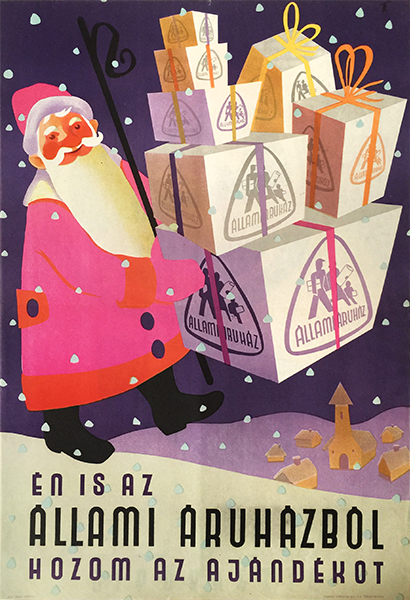 I also bring the gifts from the State Department Store

Charming commercial poster from the beginning of the 1960s.

The poster was an advertisement for the State Department Stores. They were a nationalized chain in the socialist era, founded in 1949. Private property was gradually wound up by the state from the beginning of the Socialist era. A retail trade and wholesale system was created by overtaking all private tradings. That was why brands and wide selection of goods did not exist in the Socialist countries during the 1950s and the 1960s. Hence the State Department Stores had a different system from the shopping centres known today, as they didn't have numerous little shops. Instead, they functioned as big economic units and they had several departments for women's wear, men's wear, shoes, technical goods, presents and souvenirs, toys, etc.

The poster was designed by the graphic designer couple, Révész-Wigner. They started their poster designer activity in the 1950s and worked mostly on movie, commercial, exhibition and event posters. In the 1960s and 1970s they employed a wide range of techniques and styles, including the popular Pop Art style of the era.

This work is a typical 1960s commercial piece with its cheerful atmosphere. It depicts the well-known figure of Santa Claus in a cartoon-like portrayal as he is holding a large pile of presents in boxes with the logo of the State Department Store. He is stepping forward on the snowy hills and the background shows some houses and a church. The whole composition employs several shades of light pink, orange and yellow with the shades of purple, and with black and white – all colours are in a perfect harmony. The simplified portrayal of the elements and the lovely figure also contribute to the delightful character of the design. The viewer is easily engaged by the charming, smile-raising message of the poster which is the basic idea of the design: even Santa Claus brings the presents from the State Department Stores.

Although this poster is strongly related to the local features of the era because of the specific store it advertised, it is also connected to the fresh, light-hearted commercial designs of international poster art of the post-war period.