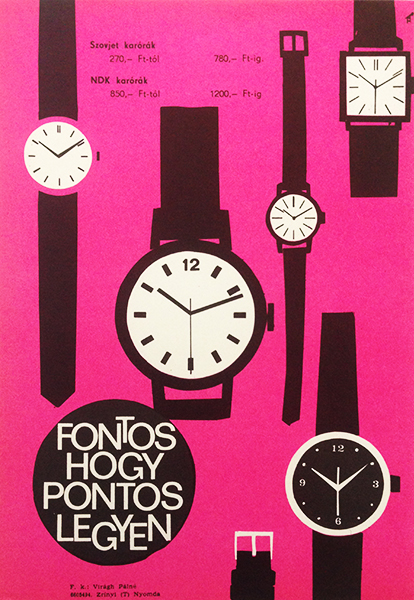 It's important for a watch to be accurate

Vivid tram poster from the 1960s to promote watches, Soviet and GDR watches in particular. During Socialism products from the Western world could not get into the Eastern bloc. In order to satisfy the need of people for buying foreign products, goods were imported from the biggest Socialist countries, the GDR, but most often the Soviet Union. These products were more expensive than the local ones and were usually promoted as good quality pieces.

The text on the poster says 'it is important for a watch to be accurate', indicating thjat these Soviet and GDR watches were accurate indeed. There are five different styles of these watches on the poster, all of them are black and white and they show the almost the exact same time, with only a few minutes difference. The idea is very interesting, that the poster promotes accurate watches but it shows slightly inaccurate ones to present a negative example. This way the audience sees how confusing an inaccurate watch can be, thus they would go for the accurate one.