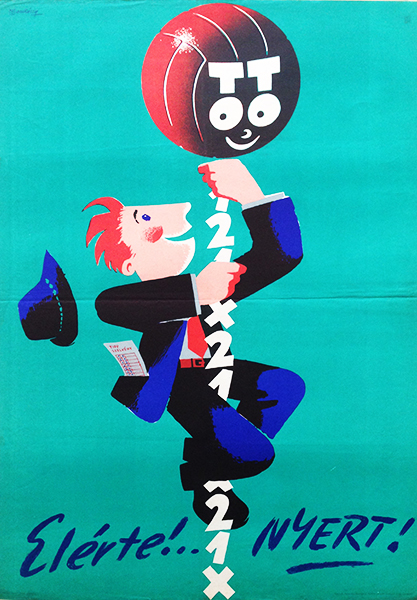 Football pools - You have reached it! ...You won!

‘You have reached it!... You won!’ – Vintage Hungarian football pool poster from the late 1950s. It was created by János Macskássy.

János Macskássy was a graphic designer and painter, active from the 1930s until the 1960s. He created numerous fantastic posters, mostly commercial ones. His early posters followed the traditions of the modernist-constructivist style in Hungarian poster art. In the 1940s his posters were also influenced by the Hungarian painting art of the 1930s and 1940s. They shown spontaneous lines and opened forms, while some of his other works used intense colours, a concentrated cut-out, and an idealized photo-like character. In the late 1940s the artist designed several great posters for big companies, such as Tungsram or Diadal. In the 1950s he became the main poster designer of the national lottery company, and created remarkable pieces.

The one-time lots, draws and raffles were replaced in Hungary by the football pool in 1947, followed by the lottery in 1957. Gambling was nationalized after the installation of the political regime, as it was a common practise in the economic life of the following socialist period. The National Savings Bank was established in 1949 and it was responsible for most of the financial matters of the state. Soon gambling was also added to them, with a good reason: it provided a source of extra income to the sinking planned and centralised economic system of the country. Hence a group of fine graphical designers was employed to create catchy advertisements for the games. These posters often used a simplified portrayal with a caricaturistic approach.

This poster is a fine example of them. It depicts a male figure climbing up on a vertical line of the numbers 1 and 2, and the letter X (these are the signs of the results of matches in the football pool). The figure is in a dark blue suit with a shirt and a necktie, and he has a football pool ticket in his pocket. As he is climbing keenly, his hat is falling down of his head. At the top an old school football can be seen with eyes, nose and mouth drawn. The eyes are outlined by two ‘O’ letters of ‘TOTO’ , the abbreviation of football pool in Hungarian. The script is placed at the bottom, it reads the slogan ‘You have reached it!... You won!’ The whole composition is put in front of a homogeneous light blue background.

This poster perfectly reveals the imaginative attitude of Macskássy. The physiognomic design of the  funny football-head was a brilliant idea of him. No wonder why it was used in several football pool posters and become a typical motif, quasi mascot of them. The scheme of the climbing is also inventive and original, and perfectly expresses the excitement of the game. The background doesn’t distract the viewer’s gaze, but helps focusing on the humorous scene which is captured in a lovely, cartoon-like portrayal. It also reveals the mechanism of the lottery and football pool posters of the era: they varied basically two elements, the memorable slogan and the playful figure in a brilliant manner.

The piece also can be connected to the tendencies of the international poster design of the decade. Product advertising came to the front with gently humorous and playful designs which tendency was represented in Hungarian poster art by János Macskássy, among others. He achieved his supreme style that time with cheerful and passionate works. This piece also has a grotesque character, and it is one of the typically fine, mature works of the artist.