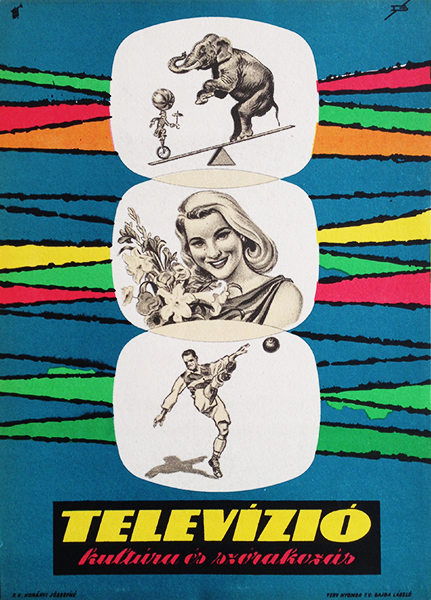 Tram poster promoting a new phenomenon in households in the late 1950s, the television. The first television devices were produced in 1955 in Hungary. The price was incredible: around five thousand Hungarian forints - while an average salary for an engineer was around five hundred per month. Whereas the trade of the TV devices started in 1956, the Hungarian Television was first broadcasting in 1957.

The first part of the 1950s was characterized by the compulsory norms of Socialist Realism: socialist content in a realist portrayal. The situation only could change after 1957, and it meant that Socialist Realism continued to exist, but it ceased to have an artificially created exclusively predominant position in culture. Housing, interior decoration, furnitures and household appliances became the keys of happiness.

This decorative piece is a perfect example for these changes. In front of a colourful background the composition shows three different type of television programmes on black-and-white screens: entertainment, programmes for women and sport. The aim of these to emphasize the advantage of the television: it brings culture and entertainment to our home.