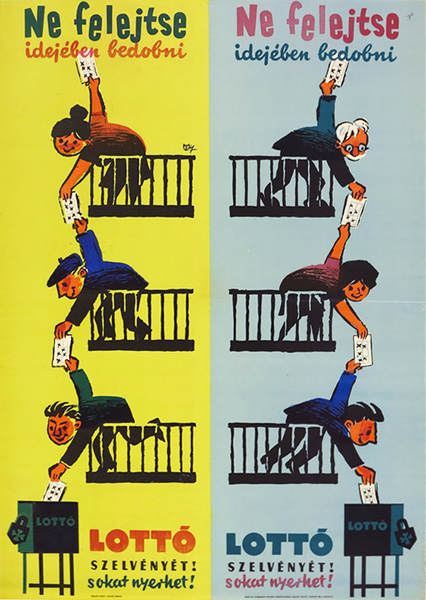 Don't forget to send in your lottery ticket in time!

Very lovely lottery poster by János Macskássy, who was the author of numerous posters for the lottery company. This lottery poster of his is typical in a way that the characters and atmosphere of the design is very similar to the other ones, however it  is atypical in a way that on this piece the lottery bioy with the four leadfd clover is not apparent.

János Macskássy invented the character which was used for the majority of the advertisments of the national lottery. It was the part of the phenomena which appeared in the 1960s when designers created characters which became associated with certain brands. These were generally nice figures who appeared in all or almos all advertisements of a brand. In order to avoid being boring, the artists used either verbal or graphic (or both at the same time) solutions. Such returning characters were: Röltex Rózsi by Gitta Mallász or the Toto (football pool) figure also designed by János Macskássy.

On this poster there are six different characters representing six different age categories: the middle-aged housewife and man with a white moustach and glasses on the top floor. Below them a younger man and a younger woman are shown and on the lowest floor two men in their twenties can be seen. The design captures probably the last moment of putting on the lottery and it seems that the characters on the poster live in one building and are helping each other in order to avoid anyone missing the deadline. The boys on the lowest floor are dropping the lottery tickets in the designated box and the others are handing their tickets over to each other. The message is clear: everyone plays the lottery. The text on the top says: 'Don't forget to put the lottery on in time' and the one on the bottom says: 'you can win a lot'. The two half of the page is almost the mirrored image of each other, but with different colours. However, the image is very symmetric the characters are different on the two sides so it is not an inverse image, although other than the characters and the colours the two sides are completely identical which gives playfulness to the composition.