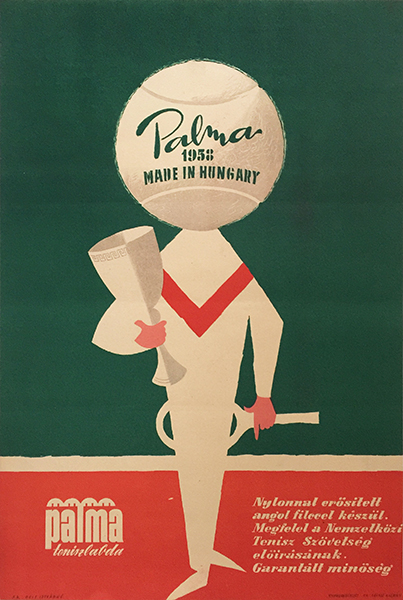 Poster for the Palma rubber production company. Palma was a rubber company producing various goods made of rubber such as shoe soles, heels or tennis balls. The Hungarian Rubber Factory was established in 1909 and was manufacturing other brands beside Palma (Emergé, Cordatic or Tauril for example).

This work advertises tennis balls where the promoted object appears as the head of a tennis player. The year of the ad, the name of the brand is written on the ball and that it was made in Hungary. According to the text in the bottom right corner, the tennis ball is strengthened with nylon, made with English felt and meets the requirements of the International Tennis Federation.

The composition is elegant, yet humorous. In the late 1950s and 1960s Hungarian posters often used humour in slogans or visual language or both. Vajda uses only three colours on this poster: green, red and white, that are the colours of the Hungarian flag, although in different order. The figure of the tennis player is one geometric form and is placed right in the middle of the page. If it weren’t for one arm holding the cup and the other holding the racket, the composition would be perfectly symmetrical. This makes the piece very balanced and harmonic. The advertised object, that is, the tennis ball is drawn with a technique different from the figure: the former one is more detailed, displaying the texture of the ball, while the latter is stylized and flat like. If the image is looked more carefully, we can get the impression, that the ball does not actually substitute the head of the player, but it is flying towards him, covering his face from the eye of the viewer.