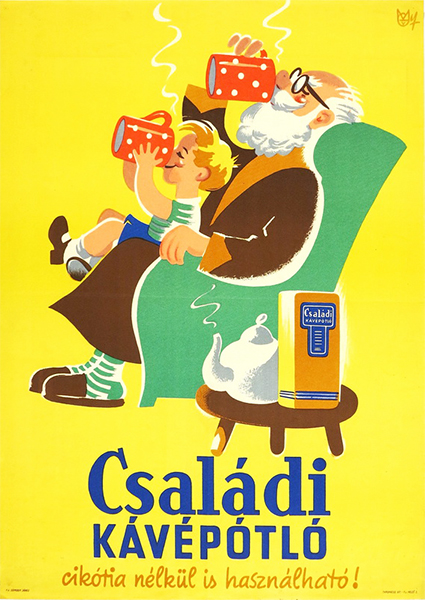 The history of coffee substitute products is as old as the history of coffee. Coffee drinking spread the world between the 15th and the 18th centuries. However, the expensive price, the not easy availability or the absolute lack of the product were the reasons of replacing it during ages. Several raw materials were used for coffee substitutes, such as rye, barley, malt, etc. After a while, the chicory plant was also found to create “fake” coffee from. It is still the most common basic commodity of coffee substitute products nowadays. The chicory-coffee was originated from the 17th century Europe, and it became an everyday need during the Continental Blockade during the Napoleonic Wars. During the years due to various reasons it was almost always hard and costly to get real coffee. In the time of this poster, Socialism, the economic decay and the Socialist attitude towards production resulted in a situation where real coffee was hardly available on the market and if it was, it was too expensive for the masses to afford it. Therefore the majority of people chose to drin coffee substitute. The other advantage besides being cheap of the substitute coffee was that it did not contain caffeine, thus children were allowed to consume it. This fact is apparent on the poster.

A little boy is sitting on the lap of his grandpa and they are very happy to drink the delicious substitute coffee. The text below the name of the product says that it can be used without chocory. The most common substitute coffes of the time were made of chicory, thus a product which did not have chicory as the main ingredient was kind of a specialty. The design is very lovely it makes the viewer feel the atmosphere of home and warmness. The usage of yellow on posters promoting coffee or coffee substitute was quite common. The artist Janos Macskassy was very sought after in Socialist times and he was famous for his light-hearted, humorous designs. This composition is one of those.