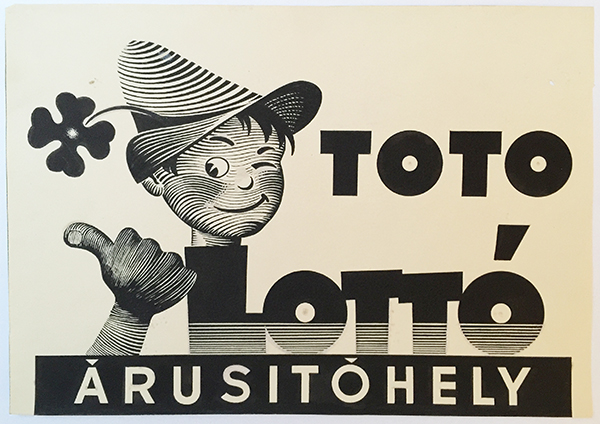 Pencil and ink on cardboard.

István Rottler was an important figure of Hungarian commercial graphic design. He created a plenty of miniature commercial design works for companies selling grocery, cosmetics and others. He was also commissioned for making advertisements for bigger companies like Orion television radio, IBUSZ, the Hungarian national travel company, or for example this design for the Hungarian lottery company. This advertisement artwork was designed for lottery sports betting sales points.

Modern lottery was introduced in Hungary in 1957. During the late 1950s and 1960s, lottery was very often advertised in Hungary. The lottery posters and commercials almost always had a humorous tone, and they were mostly based on lovely, funny characters – commonly a key character was applied to promote a specific brand. In case of lottery, this character was the boy with the four-leaf clover whose name was Lotto Ottó. He was designed by János Macskássy, but most probably he can be seen on this piece, too, applied here by István Rottler. He created a black and white design with a catchy typography and the smiling face of Lotto Ottó as he is winking and pointing his thumb sideways to show the viewer the lottery betting sales point. The design fits the light-hearted character of international poster art of the time.