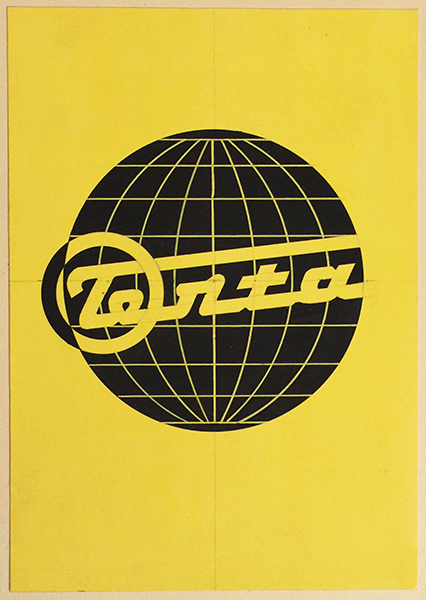 Back to the 1960s! Old-fashioned trams, blocks of flats, the sensational television and the more and more popular transistor portable radios.

The innovation of the period compared to the previous decade can be captured the easiest by fleshing a glance at the visual world of posters of the time. The innovation of machines required a simple, elegant, sleek and modern graphical design. Lajos Vajda, who was the creator of this eyeful poster artwork, did a great job to design the logo of the legendary TERTA company.

TERTA, mostly known as ’Telephone Factory’, was an innovative Hungarian telecommunication company in the 20th century. The history of the factory dates back to 1876, but it was called Telephone Factory from 1904. The first vacuum tube transmitter was created here in 1918, and the company also started producing radios in 1924-25. Later the range of products of got wider and wider, and the Telephone Factory had new and new own developments. Telecommunication was essential during the WW2, and TERTA had an important role in producing electronic military equipment. After this progression,  the 1949 nationalization made some years of depression for the company. Later, in the second part of the 1950s, it started to produce high-quality tape recorders and radios for consumer use. TERTA was one of the first factory which produced tube and transistor portable radios which were higly popular in the period. In the 1960s the right of radio-producing was only given to a competitor company and later TERTA had to change its profile and become a computer science company. With the change of the regime the factory was privatized by Siemens, and continued to produce until 1991.

The logo is impressive and catches the eye with the strong contrast of the vivid yellow and black. Only the important elements were utilised: a recognizable globe-motif and the name of the brand in a spectacular font design. The black globe-motif was used in Hungarian poster art from the 1920s, but it was reused many times later, too. In case of this image, the motif refered to the fact that Terta portable radios were popular in several countries across the globe, as the company produced for export as well. In addition, the round shape and the symmetrical pattern (the delicate graticule in the colour of the background) gives harmony for the design. At the same time, the upward sidelong brand name reflected the cheerful and trendy graphical distinctiveness of the period with its typical visual gag of the colour change at the edge where the name goes beyond the globe. The elements were put at the perfect zone to meet the direction of the gaze of the viewer. Simply a brilliant work!