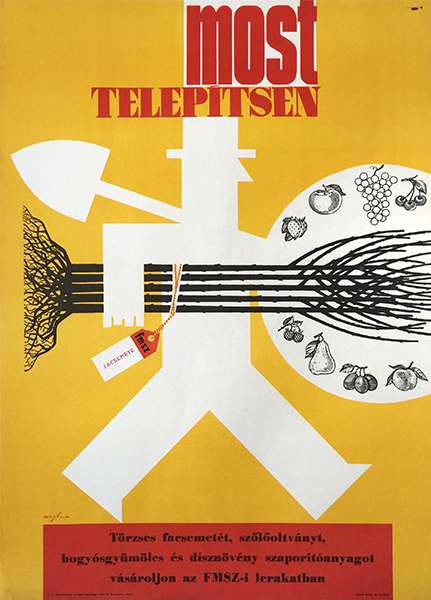 The composition is a good example of the characteristics of Bottlik's style: bright, yellow background, the use of only a few but strong colours combined with areas left blank, geometric white silhouttes, stylized shapes and simple, yet decorative typography.

On this design the white silhoutte of a man with a spade (probably a farmer) carries a tree, which is pictured as a symmetric shape, with rich roots and twigs. A ticket is hanging on it, implying that the man just bought it: it says FMSZ (Agricultural Cooperatives) sapling. The artist cleverly indicated with simple pictograms the available selection of seeds for plantation: apple, grape, cherry, strawberry, pear, peach and plum.

The text at the bottom explains that saplings, berries, mother spawn for ornamental plants and grape graft are available at the depository of the agriculture cooperative. In the socialist Hungary the economy was reorganized, everything was nationalized and farmers were neccesitated to join the agricultural cooperatives. They were ought to procure the supplies from them as well as they had to regularly hand in the products they produced as well. This system led the economy to a critical state, however,  the posters advertised the new forms as a great opportunity for agricultural workers. Bottlik's composition also has a cheerful and positive atmosphere.