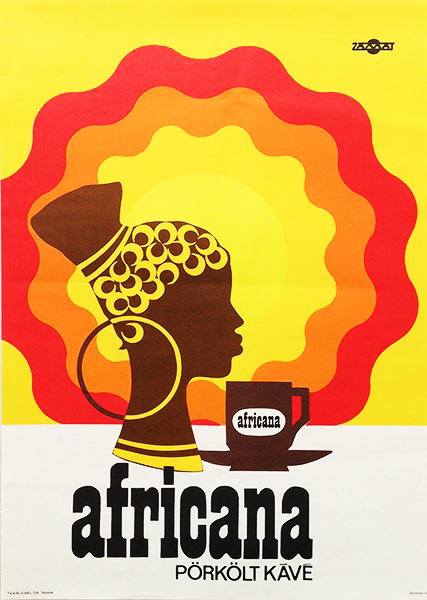 Decorative poster of the Africana coffee brand. Africana was one of the coffee brands of the Zamat Coffee and Biscuit Factory, that's why the name Zamat appears on the top right corner of the poster. The company beside biscuits and sweets was producing real coffee and coffee made of chicory. The latter one was much cheaper consumed by those people who could not afford real coffee which was very expensive in the Communist times. However since Hungary has a long tradition in drinking coffee, real coffee was also available on the market. Africana was a real roast coffee brand of the time.

Coffee was brought to Hungary by the Turkish in the 16th century, but it wasn't so popular at the beginning. It became widespread later, at the end of the 19th century, and by that time over 500 coffee houses operated successfully. Drinking coffee was brought to fashion by the Hungarian aristocrats frequently visiting the Viennese coffee houses, and bringing the habit of living social life in the coffee houses home. Unfortunately the beautiful tradition was put down when the Socialist government took over. They closed all coffee houses and the quality of the available coffee was decreasing. However, the demand for good coffee never ceased to exist and by the end of the 1960s a few brands offered better quality real coffee. This allowed people to drink relatively good coffee in their homes..

This poster advertises one of the better coffee brands, Africana. In the 1960s and 1970s the use of the colours yellow, red and orange was very typical on the promotions and packaging of coffee and chocolate. A good example is the Cream Chocolate Bar poster where similar colours are applied, or the beautiful pop art piece Orient Café Mocha by István Bakos designed in an akin manner. The colours of the Africana roast coffee poster project warmness and by looking on it, the audience can sense the aroma of roast coffee. The figure of the African lady as well as the name of the brand alludes to the origin of the coffee, Africa.